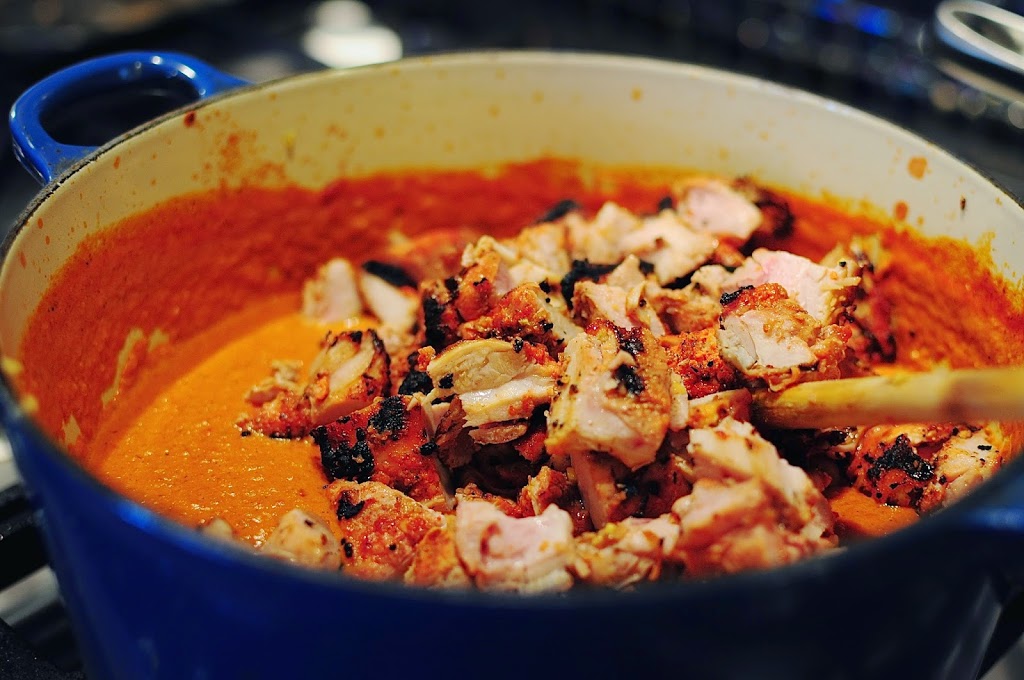 Whenever folks find out I am a food blogger with an Indian bent, the first question they ask is, “Can I please have the recipe for chicken tikka masala?”  It is inevitably everyone’s favorite Indian restaurant dish.  I’ve had friends confide to me that they would drink the sauce and lick the bowl if they could.   And I totally understand the obsession.  You take one unbelievable delicious component – boneless, grilled tandoori chicken – and smother it with a slightly sweet, tangy tomato sauce that is addictive just on its own and an instant classic is born.

This dish was created to appease British palates when India was still a British colony.  The Brits wanted a sauce to go with the traditional chicken tikka – boneless, spicy grilled chicken pieces.  A gentle, creamy tomato sauce was created to smother the meat and chicken tikka masala was born.

I’ve been toying with this recipe for years.  I started making this recipe from Food and Wine almost ten years ago.  It was very tasty but was not quite like what you would order at a restaurant.  So I’ve played with it and finally come up with what I think is the perfect recipe.  I changed the marinade to my tandoori marinade which I use on everything from chicken to ribs.  I also switched to tomato puree and added the further step of pureeing the sauce when it’s done.  In restaurants, the sauce is always silky smooth and I wanted to replicate that at home.  I’ve also found that it is imperative to add the full cup of heavy cream.  I’ve tried to make the dish lighter by using half and half and it just isn’t the same thing. The result is a dish that has sharper ginger flavor than its restaurant counterpart and also a smoky, earthy quality thanks to the homemade garam masala.

This recipe is time consuming and requires a bit of planning since you do need to marinate the chicken for several hours.  But the result is well worth it and any leftovers will reheat beautifully.  The sauce would also work well with paneer (Indian cheese) if you wanted to make a vegetarian version and probably also taste great with tandoori shrimp.  I might try that version next time!

This dish pairs equally well with rice or naan.  Add a vegetable side like tangy peas or roasted cumin carrots and you’ve got a hearty, tummy warming dinner.  Leftovers keep beautifully for up to 4 days and were anticipated eagerly at my home.  So don’t even think about halving the recipe!

1.  In the bowl of the food processor, combine first five marinade ingredients and process until everything is homogeneously finely ground.

2.  Add the salt, yogurt, and tandoori masala to food processor and blitz until everything is well combined.  You will have a brilliant salmon–colored marinade.

3.  Cut 2-3 deep slashes in each piece of chicken – about 1/4 inch deep.   Cover the chicken in the marinade and marinate at least 3 hours, preferably overnight.

4.  Remove the chicken from the marinade and grill on a gas grill over medium heat, about 7-8 minutes a side.  If you don’t have a grill you can also broil it in the oven on medium for 5-6 minutes a side.  You want it to be just cooked all the way through. 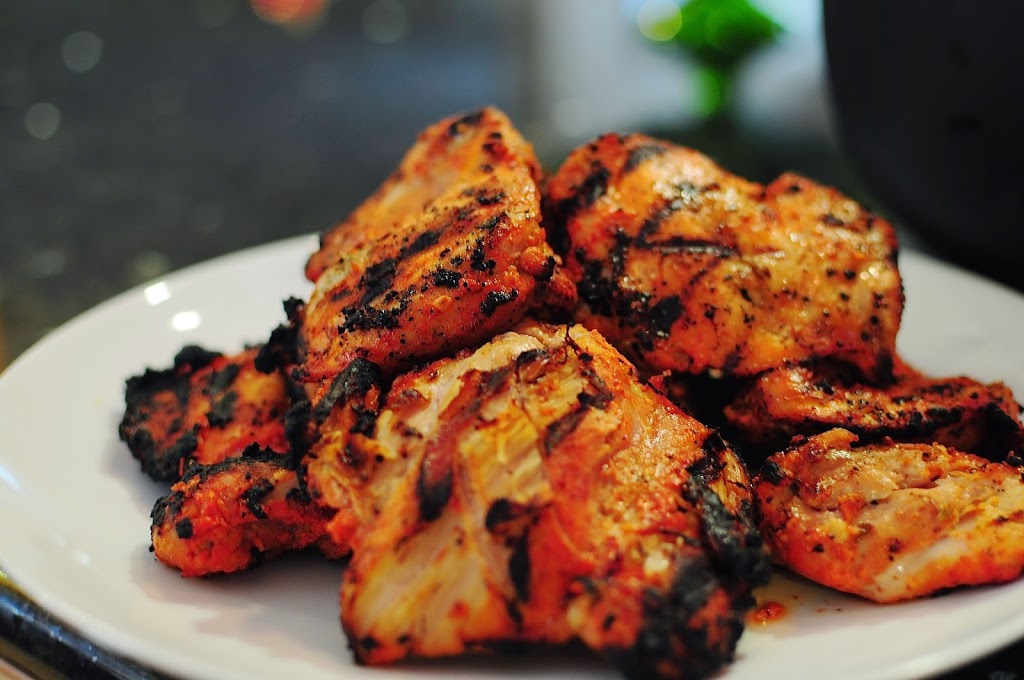 6.  Meanwhile, in a small skillet, heat 1 teaspoon of the oil. Add the almonds and cook over moderate heat, stirring constantly, until golden, about 5 minutes. Transfer the almonds to a plate and let cool completely. In a food processor, pulse the almonds until finely ground. 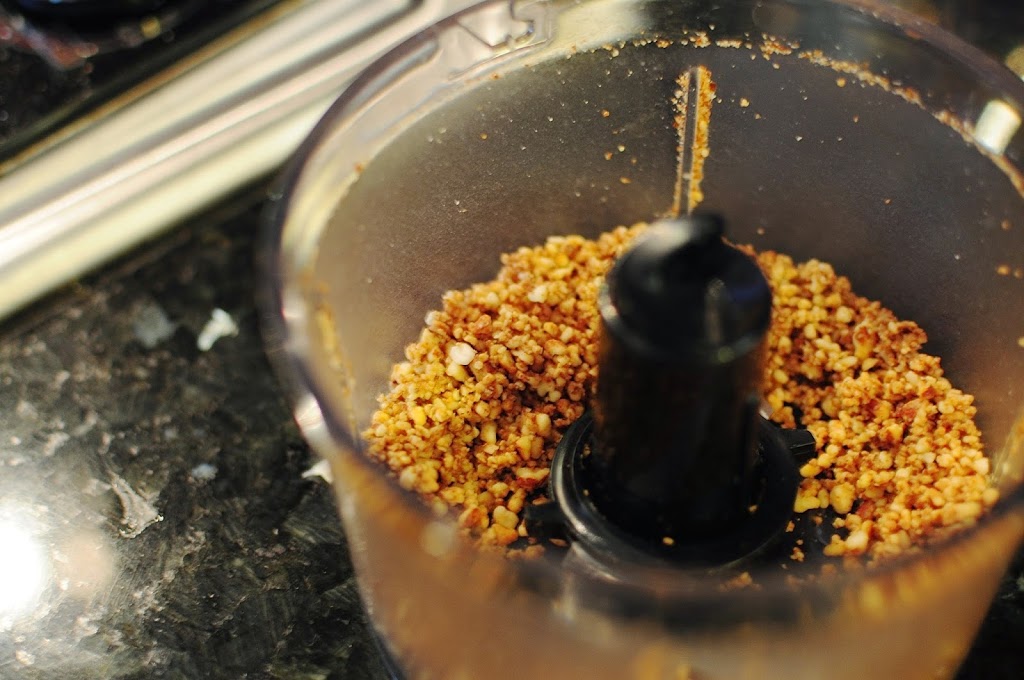 7.  In a large enameled cast-iron casserole, heat the remaining 2 tablespoons of oil until shimmering. Add the onion, garlic and ginger and cook over moderate heat, stirring occasionally, until tender and golden, about 8 minutes.

8.  Add the garam masala and chile flakes and cook, stirring, for 1 minute. Add the crushed tomatoes, water, and the sugar.  Season with salt and pepper.

9.  Cover partially and cook over moderate heat, stirring occasionally, until the sauce is slightly thickened, about 20 minutes.

10.  Add the cream and ground almonds and cook over low heat, stirring occasionally, until thickened, about 10 minutes longer.

11.  Puree the sauce to give it a silky texture.  I used one of those stick immersion blenders but you could also transfer the sauce to a traditional blender and blitz.  Just make sure to fill up the blender only halfway and also some way for the steam to escape.  Usually the lid has a plastic insert you can remove.  Cover the resulting hole with a kitchen towel to prevent splatters.  Transfer puree back to the pot.

12. Stir in the chicken; simmer gently for 10 minutes, stirring frequently, and serve. 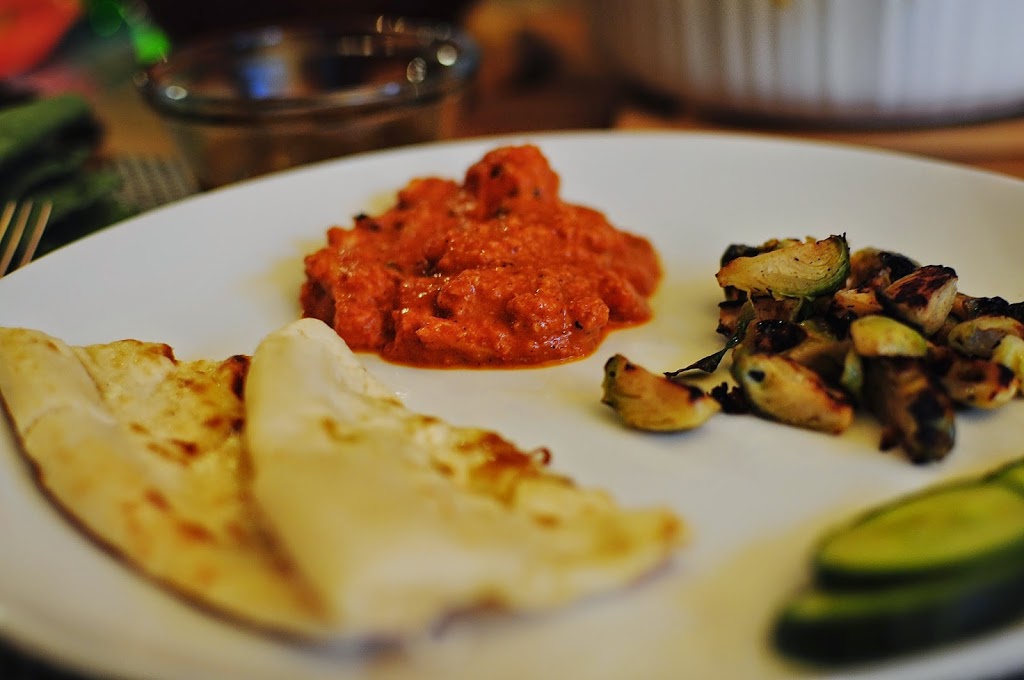