You are here: Home / Recipes / Roasted Moong Lentils with Cauliflower and Peas 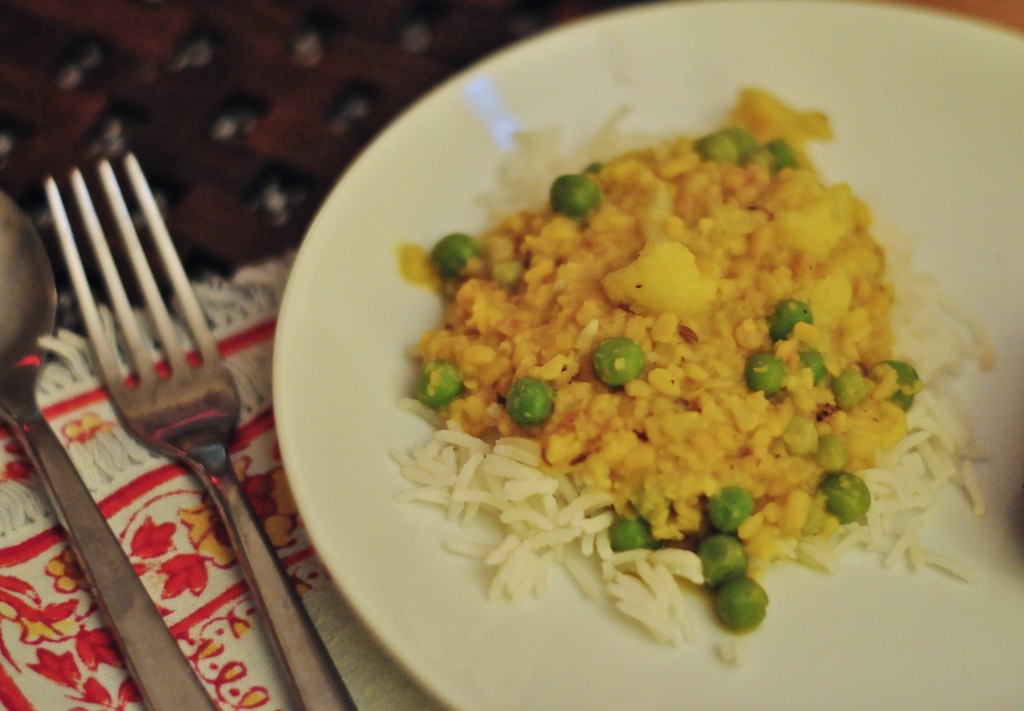 Arjun and I have been married for almost eleven years.  And for the majority of that time I have been on the hunt for a good cookbook that features recipes from West Bengal – the Indian state from which Arjun and his family hail.  And along the way Arjun and I have bought a few misses.  I had honestly just about given hope that there were any Bengali cookbooks written for the likes of me – someone who doesn’t have the basic knowledge of a Bengali kitchen and was raised outside of India.  So imagine my surprise, when browsing at a bookstore in Kolkata on our last trip, I came across a book based on a blog written in the US called Bong Mom’s Cookbook.  This lovely book and also blog is written by the talented Sandeepa Mukherjee Datta.  Sandeepa recalls foods from her childhood in West Bengal beautifully and lyrically.  Her recipes are always woven with stories of her childhood or her present – busy with two kids of her own that she is trying to expose to her family’s native cuisine.  She is candid and funny and just a delight to read.  I started leafing through her book in Kolkata and couldn’t wait to bring it home and give some of her recipes a whirl in my kitchen.

One  dish that stole my fancy on our trip was a yellow lentil stew with cauliflower and peas.  Small, bright moong lentils are used and the stew is simply spiced and incredibly comforting.  I loved that there were veggies in the stew both for the variation in texture and flavor plus making this a one-pot meal.  When I saw that the Bong Mom’s Cookbook had a recipe for this dish I knew that was the first one I was going to try.  Sandeepa calls to make the stew with shrimp or peas.  I opted for peas since I was already serving fish with the meal.  I also increased the amount of vegetables from her recipe so it would feel heartier and play the part of vegetable and lentil at my table. 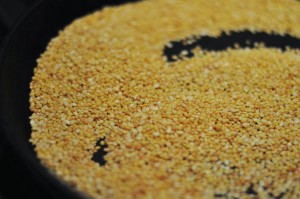 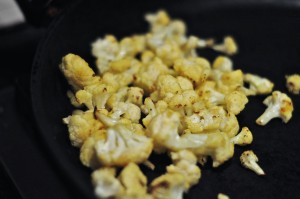 I’m happy to report that it turned out beautifully and tasted just like what we had at relative’s homes in Kolkata.  I served it with basmati rice and the fish croquettes I blogged about recently.  Arjun took one taste and looked amazed – he said that taste transported him to the meals of his childhood.  I can’t think of a better endorsement (or compliment) than that!  Try it for your very own Kolkata taste at home. 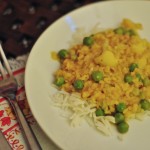 **You can find moong lentils at your local Indian markets or online.

Ghee is simply butter that has had the milk solids removed.  It is shelf stable and sold at grocery stores like Trader Joe's or Whole Foods.  You can also find it at Indian markets or online.