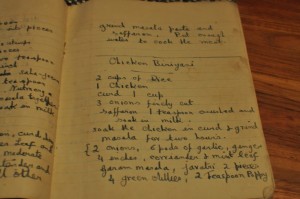 When my family and I were visiting Calcutta in April, we discovered a gold mine at Arjun’s grandfather’s home – his grandmother’s old recipe book.  Written in her own hand on yellowed pages, it contained a number of Didu’s signature recipes.  I was ecstatic to find this culinary treasure.  Arjun’s Didu was a phenomenal cook and he speaks fondly of so many of her dishes.  It is more than I could hope to to find a personal account of so much of her culinary repertoire.  One dish immediately caught my eye – her Chicken Biryani, a Indian rice dish that is layered with spiced chicken, browned onions, almonds, raisins, and hard boiled eggs.  It is substantial enough to feed a crowd and makes dinner for two feel like a special occasion (with plenty of leftovers.)  Arjun had spent the past week in Spain and I knew he was going to have a hankering for some home cooked Indian goodness so I decided to give Didu’s recipe a whirl.  I had to cross reference it with a few other recipes because, while Didu was a meticulous cook, her descriptions of her cooking process are less than exact.  My resulting process involved a quick soak for my chicken in a marinade followed by cooking it on the stove top.  The gravy of the chicken is mixed with parboiled rice and then layered with the chicken, browned onions, almonds, and raisins.  After a quick bake in the oven it is garnished with hard boiled eggs.  He may have been feeling nostalgic but Arjun declared it was the best chicken biriyani he had ever had – high praise from someone who considered biriyani consumption somewhat of a sport in high school.    He also said that he remembered Didu making it with dried apricots instead of raisins and adding boiled potatoes for garnish – a variation I look forward to trying on my next go round with this tasty dish.  Warning – this is definitely a recipe for a lazy day when you have a few hours to putter around the kitchen.  It isn’t hard, just requires some time.  The result is well worth it!

1. Put all the marinade ingredients into your food processor and blitz until you have an evenly ground mixture.

2.  Cover the chicken thighs with the marinade and refrigerate for at least two hours to overnight.

3.  Heat 2 tbl of oil in a large dutch oven.  Add the cloves, cardamom and cinnamon stick stick and saute for 2 minutes until the spices release their aroma.

4.  Add the chicken with its marinade to the dutch oven.  Bring it to a simmer and let it cook until the liquid has reduced by two-thirds.  This will take 30-35 minutes. 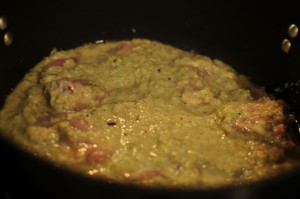 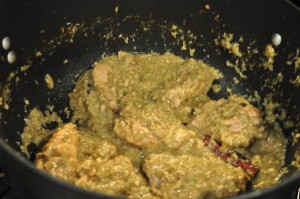 5. While the chicken is cooking parboil your rice. Wash the 2 c of rice thoroughly – I typically wash and drain at least 4 times.  Bring 3 cups of water to a boil in a pot with 1 tsp salt.  Add the washed rice and cook until the water is absorbed – about 10 minutes.  The rice will still have a little bite to it.

6.  Heat 1 tbl of oil over moderate heat in a fry pan and cook the onions until they are a deep brown.

7.  After the chicken is cooked, remove the thighs from the gravy left in the pan.  Mix the cilantro and mint into the gravy.

9.  Add the gravy to the parboiled rice and stir thoroughly.  Do not wash the dutch oven. 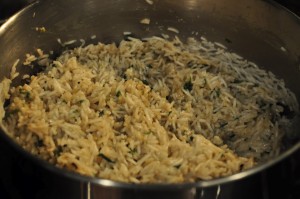 9.  Now you are ready to layer up the dish.  Add 4 chicken thighs at the bottom and cover with half the rice.  Sprinkle with half the browned onions, almonds and raisins.  Repeat again. 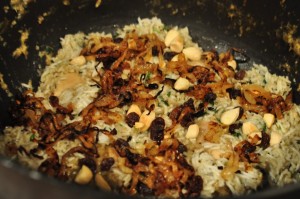 10.  Melt 1 tbl of butter into 1/4 cup of water.  I just microwaved them together for 30 seconds.  Pour this mixture over the layered rice.

This dish reheats beautifully.  I served it with roasted cauliflower tossed with sesame sea salt (posted that recipe last month if you missed it!) and some cucumber raita.  Raita is simply yogurt mixed with usually a raw vegetable, in this case grated cucumber, plus some salt and ground, roasted cumin. 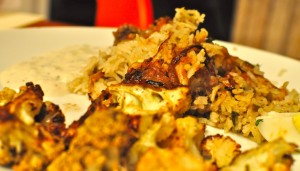